A service dog competes in a national Trick Dog competition! 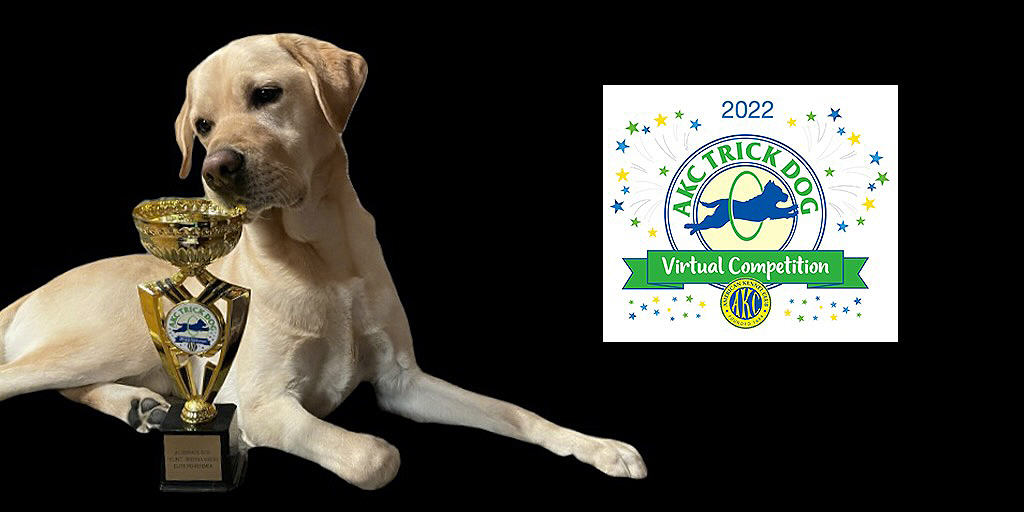 My mom and I entered a virtual Trick Dog national competition offered by the American Kennel Club (AKC). And we just found out that I received an award! An award for the #1 service dog in the competition! I will tell you more about that in a minute. But first I want to tell you about entering the competition.

Earlier this year the AKC announced the 4th annual AKC Virtual Trick Dog National Competition. It was open to all dogs who had earned the Trick Dog Elite Performer title before July 1, 2022. 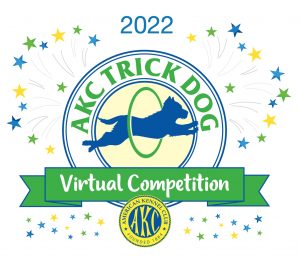 My mom and I were eligible because I met this requirement. Since I earned my tile in May of this year. You may remember reading about it in my post: A service dog earns the AKC Trick Dog Elite Performer title!

The video submitted needed to be no longer than six minutes in length. And it had to have a theme or storyline, the same as required for the Elite Performer title. As well as higher-level type tricks.

You could even submit two different routines per dog if you had one to enter. Which my mom and I did. My Game Night routine and a Service Dog routine.

Because it could be no longer than six minutes, my mom had to refine our original “Game Night” routine. The one we had used for my title submission. Since that one had been over eight minutes long, she had to change some things.

This resulted in changing some of the existing games and adding some new ones.  As well as adding a new trick at the end. Causing me to learn some new things. Which you know I love doing!

For the second routine submitted for the competition, I did a few of my service dog tasks. My mom had to improvise with some of the props. This was because the routine had to be one that could be performed at a nursing home, school, or other similar settings.

After we videoed our routines, my mom sent them in for the competition. Then we waited. And we wondered. But our expectations were realistic. So she wasn’t expecting to win anything.

Knowing that there were likely many submissions, my mom was just happy and grateful that we were able to enter.  Most of all, we had lots of fun learning new tricks and routines. Practicing and playing our games. And doing fun things together.

But then my mom received an email that took her by surprise. And made her cry happy tears. In part, it read…

“We are pleased to tell you that you and Clint will be receiving a trophy because Clint was the #1 service dog in the AKC Trick Dog competition.

Both of your submissions were great, but the judges especially loved the “Game Night” routine.”

So earlier this week, I received my trophy. And later this month, I will receive a rosette. I was going to wait until I also had my rosette before sharing this news. But I was too excited and couldn’t wait until then! 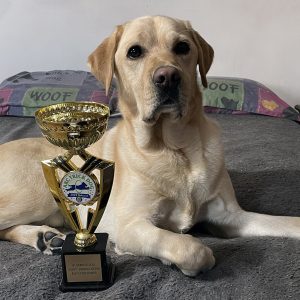 Me with my trophy!

There were 151 competitors from 35 states and Canada. There was an overall winner and two finalists. And some individual breed and special category winners. My mom was deeply touched and honored that we were recognized for our routines.

The trick training we have done together over the past two years has been fun and rewarding. Since I keep my mom challenged with finding new and different things to teach me, this has given us direction and goals to work toward.

Since finishing our trick dog training, we will put more effort into our Rally, Obedience, and Fenzi TEAM training. I love my mom. And all of the fun things we do together!

In other news, we were also recognized in the Fall 2022 issue of the AKC Canine Partners newsletter. A small write-up was in the “Competition Updates” section.

Canine Companions Clint Assisting Me TKE owned by Brenda Weeks of Auburn, ME

Brenda has had a lifelong love of training and showing her dogs, which began when she was 10 years old. For the past 15 years, she has trained and competed with her service dogs while being fully dependent on a power wheelchair and ventilator. This includes conformation, obedience, rally, and tricks.

She is working with her service dog, Clint, and they are nearing the second anniversary of their partnership. “His love of training and learning new things is impressive. He loves his job as a service dog and equally loves the sports dog training we are doing together,” Brenda said.

Clint and Brenda started out wanting to learn a few tricks and get some Trick Dog titles. It didn’t take him long to amass a vast number of tricks. They quickly earned Novice, Intermediate, Advanced, and Performer titles. “But we didn’t stop there! Could we get our TKE? I decided on a theme and worked on creating a story. I began collecting the needed props and refining the storyline so that it flowed smoothly. Clint eagerly worked on new skills and quickly learned new tricks. We both had lots of fun and looked forward to our training sessions.

Finally, they had the script written and the tricks perfected. They were successful in receiving the Trick Dog Elite Performer title – an accomplishment that Brenda had only dreamed of achieving. She has found that training beyond regular service dog tasks increases their bond and adds an additional layer of fun.

“Clint enhances my independence far beyond measure with the innumerable tasks he performs daily. He gives me the confidence to venture out, knowing he is there to offer any needed assistance. Clint makes it possible for me to live each day to the fullest, making an ordinary day extraordinary. But beyond the physical tasks he performs for me, he has me excited to train again. We are working on our foundation skills for rally and obedience, with the dream of competing soon!” 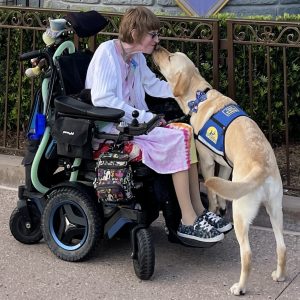 The photo that was included with our write-up! 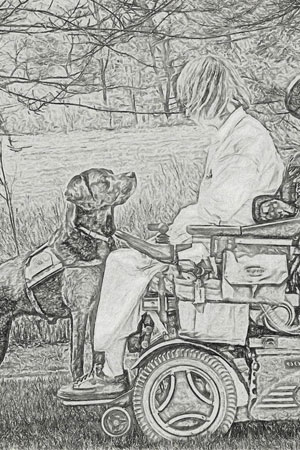